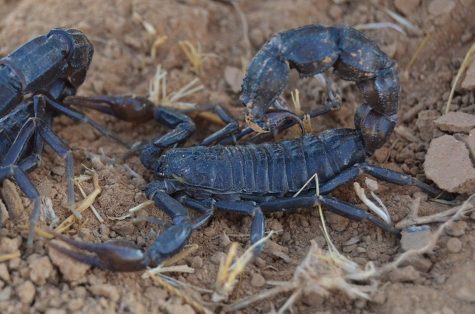 Egypt’s terrain is comprised of low mountains and deserts, so it has quite frequent sandstorms, but recently Egypt has been having flooding and heavy rain. These storms have uprooted venomous scorpions causing them to find new homes. The storms have also destroyed buildings, washed out roads, uprooted trees, and cut off electricity.

The scorpion’s official name is the “Arabian fat-tailed scorpion,” or Androctonus crassicauda, which translates from Greek to “man-killer”. The scorpion has highly toxic venom and is considered one of the most dangerous in the world. It is about 8-10 centimeters long and it has poor vision, so it relies on sound and vibrations to find its prey.

So far there have been 3 dead and more than 400 hospitalized but the Ministry of Health has reassured the public that they have an anti-venom treatment. The symptoms that have been seen include severe pain, sweating, fever, vomiting, diarrhea, muscle tremors, and head twitching.

For now, citizens are asked to stay inside their homes and some ways to avoid them include checking cabinets and closets, sealing windows and doors, clearing away debris near your home, and turning outdoor lights off. Since scorpions feed on prey like insects, try to keep common bugs like crickets out of your home. If you were to come in contact with one, clean the wound, apply a cool compress to reduce the pain, and try to get to a hospital; they have the anti-venom treatment to help.