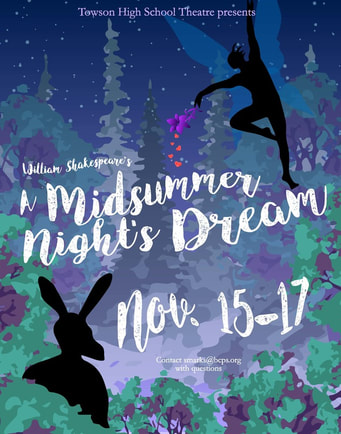 November is finally here, and magic is in the air as Towson High’s very own acting stars take the stage in a storm of fairies, magic, and foolish mortals.

The time has come for our annual winter play, and with actors and crew now working together, anticipation and excitement is flowing through the air in the Towson High auditorium. This year’s team is run by director and teacher Ms.Marx, who has worked for months with the cast to create a Midsummer Night’s Dream with a modern twist.

The new and exciting take on the classic has given both actors and crew members the chance to explore their creativity with few limitations. Crew member Cameron McCallion said, “The crew and cast have made me feel welcome as a team member. We have all come together nicely to create a fantastic play that’s sure to blow the audience out of the water.”

We know that theater can’t be boiled down to just cast, crew, and director. It’s like a system of puzzle pieces and if one goes missing, we notice. Everyone plays a part in making the show be the best it can be. We all are happy to play our part because, in the end, it is about creating something wonderful, together.

Putting on a production ends up being a lot of work. You have the average school hours, homework, tests, quizzes, etc… Then you have the extra six hours after school every day dedicated to practicing and improving the play before showtime. There is a running joke that tech week is hell week because of all the hours that we put in, but behind the scenes, we can all agree that tech is can be one of the best weeks of the year. It’s not mandatory, everyone chose to be there. We put in the time, not because we are told to, but because we care about the productions we put on and we want the rest of the school to share in the magic of the play.

Check out below to hear what the actors had to say backstage before opening night:

“I’m so grateful that I have the opportunity to work with Shakespeare incredible words. The play itself is so legendary that we’re just trying to do it justice and its definitely paying off.” -Actor Finnegan Gooding

“Everybody in the cast and crew has done an amazing job putting this show together and has worked incredibly hard. I know we’ll all feel the benefits of our show Friday, Saturday, and Sunday because I genuinely believe our show is a magical take on a Midsummer Night’s Dream.” – Actor Zoe Johnson

“The play was really good! There was a lot of hidden effort that made the play run smoothly. While there were hijinks, most of them were harmless fun that was easily fixable for the live show. I was picked up as a kind of afterthought – and was still welcomed into the cast. Everyone involved is so kind!” -Alex Santos

Being a leader in crew myself and having been a part of theater for three years now, I’ve had the pleasure of seeing everyone grow and evolve in their craft. In the end, we all agree that no matter what happens, we can be proud of the show we put on.